Stereolithography (SLA) is one of the methods used to create 3D-printed objects. It is the process by which 3D printers convert liquid plastic into solid objects. This liquid plastic is called a photopolymer, or ‘resin’, that changes its properties when exposed to light.

Starting from a 3D file, a model is built by cutting it into thin layers via specialized software. Where needed, a support structure is created in order to deal with overhangs and cavities.

How does SLA work?

SLA printers have four main parts: a tank that can be filled with resin, a perforated platform that is lowered into the tank, an ultraviolet (UV) laser and a computer controlling the platform and the laser.

The process takes place in the large tank, and begins when a layer of the resin is spread over the platform. The computer uses a controlled laser to draw the first layer onto the surface of the resin, which hardens (“cures”) where struck by the laser. The model is then lowered and the next layer is drawn directly on top of the previous one. This is repeated until the model is finished. In this way, layer by layer, an object is “drawn” in the liquid by the beam, with the layers being consolidated throughout the process.

One of the great advantage of using the SLA technique is that created objects are very precise and have smooth surfaces. It is an ideal solution for creating prototypes because it creates highly accurate and durable objects. SLA printers can even create oddly shaped objects.

Being able to cure a liquid resin on demand is a very useful feature in 3D printing. Resin systems that obey a convenient “signal” and specifically light, open up possibilities that increase the control and precision of the building process.

These photoinitiated resins are largely divided in two groups:

The photo initiator concept: why it works

One very important concept is that intensity of the light source is only one factor in this chain of events. You may think of photoinitiators as being “tuned” to a given wavelength. Just as a piano string that produces a certain pitch of sound depending on its length and tension, photoinitiators are tuned to a given light wave length. This tuning depends on many things: the type of molecule, its structure, component elements and electric distribution of charges.

Photoinitiators are mostly organic compounds, molecules that have a combination of functional groups in them that adsorb a given wavelength of light. Once this light is adsorbed, the internal structure changes. 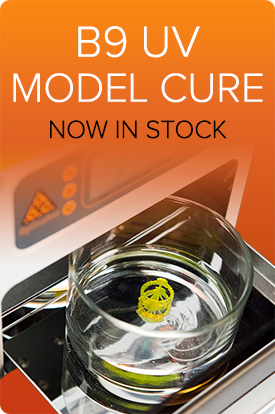 Great Results - Switched from B9 Yellow Resin to B9 Emerald Resin

Introducing the New B9 Core Printers

B9 Resins and Jewelry - When fine details and casting are critical